Last week I bought a bunch of old Chess in Australia magazines from Peter Parr. It's always fun reading these old publications. The experience is both educational and informative. I also have some old Chess Worlds going back to the '30's I think. I must have read them over and over again a hundred times now since I bought them.

Today, I'd like to share the front cover of the May 1974 issue of CIA. This one is especially for our Pinoy readers. 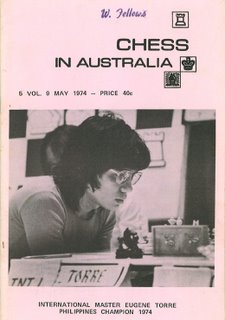 The CIA cover features, as you can see, Eugene Torre for proving victorious in that year's Philippines Championships. Torre scored 15.5 points, above such memorable names as Cardoso, Balinas, Naranjas, Maninang and many others.

Chess in Australia had the following write-up on the event.

This is Torre's second successive win of the title and, not yet 23 years of age, appears to be on the threshold of a brilliant chess career and may well become Zone 10's first resident Grandmaster.

From now on, Chess in Australia will be showing great interest in chess activity in the Philippines for two important reasons. Firstly because they are one of our nearer neighbours and a fellow member of FIDE's Zone 10. More importantly though, they are now starting to read and subscribe to Chess in Australia. This closer liaison with Australia should result in mutual benefit even if only to ensure closer relationship and understanding.

A month later, at the Nice Olympiad, RP's greatest chess hero, then age just 22-years old, won the silver medal on board 1. And with that achievement Torre also became Asia's first ever grandmaster.

Today, the Filipino-Australian connection continues. Many masters from RP have visited. Last year, for instance, there was Jesse Sales (and who is now residing temporarily in Melbourne). In 2007, we hope to see a whole contingent of Pinoys paying a visit to the Sydney International Open. My goodness, I just cannot wait for that!
Posted by The Closet Grandmaster at 7:36 pm

Look how time flies, 1974 was Torre's historic year as he became RP and Asia's first GM.But 32 years later, the old but reliable Torre, who was the best Pinoy performer in the post-Olympiad event in San Marino, was by-passed in the Doha event by no other than his own chess fed. But Torre need not despair for no other than RP's first SUPER-GM was also given the same treatment.