Chess in the Undergrounds

The so-called Jamaican Chess Champion, who spent much of last year travelling around Australia, has recently been spotted in Europe. International Master Javier Gil, Spain, informs me that Pablo Williams (our Champ) was in Berlin earlier this year.

And this month, he made his way to Barcelona where he has set up his little show in the Metro. According to this article, it seems Pablo has now relegated himself to Jamaica's No. 3!

Below is a photo I took of him playing along George St in Sydney. His opponent is Oliver Koeller, of Germany, who had the pleasure of upsetting GM Rogers at the 2004 ANU Open. 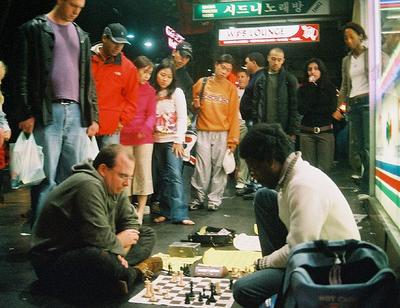 Posted by The Closet Grandmaster at 11:17 pm