He's done it! IM David Smerdon has finally earned the GM title after just 5 rounds in the 7-round NSW Open this long weekend. He posted enough wins, including one over IM Gary Lane, to gain the required number of FIDE rating points and reach the magic 2500.

To add that little cherry on top of his grandmastership, David then also went on to actually win the event and go home with the $1,250 winner's cheque. His total tally was 6.5 points from seven games.

Top placers were as follows:

In the final round Smerdon led the field with 5.5 points while four of his nearest pursuers were on 5. Therefore, a win in the last round against Tomek Rej was vital. Sydneysider Tomek, however, had other ideas. Tomek pressed and pressed, eventually even causing Australia's latest GM into severe time trouble. 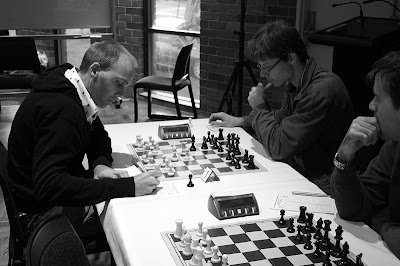 Smerdon - Rej, 1-0
I suppose feeling the extra pressure over-the-board and annoyed by the ridiculously loud chatter that emanated from the arbiters' desk, Smerdon had just about enough. He let loose with a thundering, "Ssshhh....Oi, shut up!"

Exactly a week ago I posted the classic game Viner - Crakanthorp, a game that involved a piece sac on the square g5. FM Greg Canfell must have surely paid attention to that one. Witness what he did to Pinoy-Aussie Raul Samar.

For his efforts, Canfell gets a cheque for $510 (along with Lane and Bjelobrk) while the 6 playes with 5 points received $75 apiece. Pinoy readers will be interested to know that Kimberley Cunanan was also in the event and she finished with 4.5 points, enough for $135.
Posted by The Closet Grandmaster at 8:49 pm