In case you missed it, Canberra's Bill Egan made a little comment to my post about John Hanks' passing. It's worth quoting here separately:

In his Canberra Times obituary Ian Rogers mentions Hanks' propensity to write "20-page letters" on issues that attracted his attention. Not quite 20, but I received a densely written three-pager commenting on my having, as Editor of the Bulletins for the 2000 Australian Open in Canberra, presented the final position from Breyer's famous 50 move retro problem as a draw. Amongst much other interesting information re the history of the Open, John gently chided me: " I mention purely (underlined) as a matter of interest, that your remarks re [the diagram] are not really accurate. I can accept that in the position 50 moves with no capture or pawn moves have been played. But that does not (double underline) make it a draw. All it means is that White can (before making a move) claim a draw whilst on Black's last move, before moving, he too could claim a draw. As it is, White to move will win with ease." John then went on to provide some analysis to support his claim, finishing, "All draws have to be agreed or claimed - the sole exception is stalemate."

I think this provides a good example of John's courteous but firm commitment to accuracy. I'm not sure if it "cooks" Breyer's composition, which was a remarkable concept from any perspective.

And thanks to Bill I can present here that problem composed by Gyula Breyer which was published in the Chess Amateur of February 1922. Using retro analysis, prove that this position is drawn by virtue of the "50-move rule". 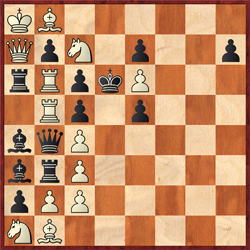 Posted by The Closet Grandmaster at 8:37 pm