Only 29 players turned up - another very disappointing number. If NSWCA boss Bill Gletsos doesn't think there's some sort of a crisis, he must surely think so now. NSWCA is looking like it's going to post another big loss come November. However, and to be honest, I just can't see a turnaround any time soon. Weekend chess these days, at least in Sydney, is just not so attractive. 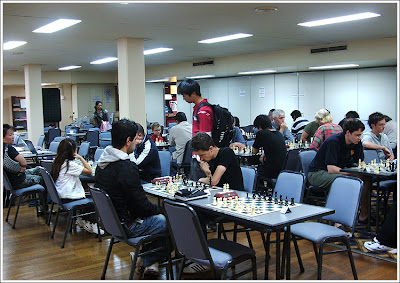 Small turnout for the City of Sydney Rapid
Top finishers:

More photos from this event are in my flick stream.

Today's venue, Parramatta RSL, is not far from the SIO venue, the Town Hall. It looks like the city is all set for the chess. There is a giant poster screaming, "Chess Festival". And the organisers are doing everything they can to promote, not only the SIO, but just about anything to do with chess - including today's rapid. This morning SIO co-organiser Vasil Tulevski played host to a photographer from the Parramatta Sun newspaper. So it looks like all systems go for what is set to be the biggest chess event in Sydney!
Posted by The Closet Grandmaster at 7:50 pm

Too many routine weekend events. Lack of excitement. Need to rethink and rejuvenate all NSWCA events. For example, scrap City of Sydney. Come on guys you can do it if you get creative.

hmm, a way for chess events (anywhere) to be rejuvenated ... perhaps get the male participants to actually spruce themselves up and stop looking like losErs?

Yeah, well said TCG. Gletsos has a crisis on his hands, that is for sure. Yet all he [and it seems the rest of NSWCA committee] does is bury his head in the sand like an ostrich and pretend that all is OK. What can I say? Emperor Gletsos plays the fiddle while Rome literally burns.

The NSWCA waste too much time on silly personal vendettas, like trying to get even with Matt Sweeney and Peter Parr.

If the NSWCA spent as much time looking after NSW chess as they do on silly personal vendettas, then NSW chess would be in much better shape.

What about supporting Peter Parr's excellent initiatives for the next Australian Open to be held in Sydney? Surely an Aussie Open in Sydney would be good for NSW chess players? Or are personal vendettas against Parr more important than the interest of NSW chess? The NSWCA should be encouraging a man like Parr, who has a vast experience and knowledge of NSW chess and knows how to run chess tournaments. Sadly it looks like NSWCA pettiness takes precedence over the interests of NSW chess once again.

City of Sydney (pop 2,000,000+)attracts 29 entrants, Doeberl will have 200+, Sydney International will have 150 maybe plus. Even Dubbo (pop 35,000) can get 21 players!
NSWCA needs to have a real look at what is going on and why people are not playing in their capital city events.

Judging by the continual low turnout for Sydney tournaments I would hope the Australian open /championship isnt held in Sydney until NSW gets its house in order.

We dont want to have 2 poorly attended end of year tournaments in a row. Lets not repeat the debacle of Canberra.