Apologies for the lack of updates folks. Only now did I find a net connection. Costs a fortune though!

Day 2 and already we have an upset. Jesse Sales has just beaten GM Daryl Johansen! I don't have the game but I have an even bigger news. IM Stephen Solomon, of Queensland, has caused a huge upset beating the top seed GM Shipov!! 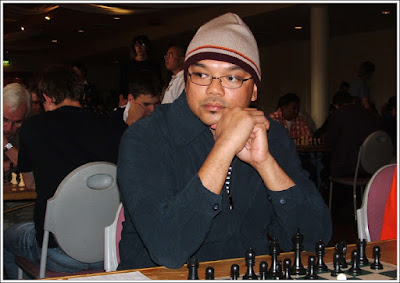 As for my own campaign, I'm actually off to my best start ever in the Doeberl. After 3 games, I have 2 draws (to local man Bliznyuk and Dr Tulevski) plus a win against the wheelchair bound Tamzin Oliver.

Total number of participants is actually down this year. I suspect that this has a lot to do with the SIO. Travelling down to Canberra for 4 days of chess and to be followed immediately afterwards by another biggie is surely a turnoff for some. Just as well, I guess, because this year's Doeberl has all the 3 events - premiere, major and minor - played in the Damiano Hall. So there's plenty of room of left. Apparently, there is some sort of renovation being done to the small room, where the premiere is normally held, and the lighting is quite poor. "Out with the rest of the masses" is how one Victorian visitor put it.

More photos in my flickr stream.
Posted by The Closet Grandmaster at 12:39 pm