On my last day in Queenstown I had a brief chat to IM Alex Wohl who revealed that, for the last few months, he has gone about his business without the assistance of a database! No Chessbase, no Chess Assistant, no SCID. Nothing. Basically, he's just been playing chess. Well maybe it did him some good because, as far as he's concerned at least, his results have been very positive. He is, of course, a joint winner of this year's Aussie Open. And in Queenstown, he produced these two gems. 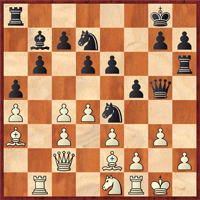 Actually, that reminds me of something that I've been meaning to write about: so-called preparation particularly by, let's just say, "average" players. These guys use the very latest, not to say expensive, chess databases. Yet it's not clear to me what good this activity, and the tools, actually serve them. Often it's all just memorising a few moves, sometimes of an opening that they've never even played before. And that's if they get lucky. More likely, either the expected opening or line just simply fail to appear! This leads to panic, the player fails to adjust and, before they know it, the point is lost.

Much better I think to do what Alex did. Just play chess. Have fun!
Posted by The Closet Grandmaster at 7:57 pm

Not using a database? I think Alex is having a lend of you.

In regards to the crazy database comments :-

I for one added 500 rating points to my national rating from use of databases. No serious player these days should be without one.

Even though Alek Wohl didnt use a database for Queenstown, this is very unusual and not the norm. However if it were possible take away all he had gained from database use, he would not be the great player he is today.

Its clearly very helpful to know something about what you are doing in the opening, and what your opponent likes to do.

They say 1 hour database study is worth 30 hours books study. Kasparov famously said databse are the biggest development in chess since the printing of the book ! Even the great Bobby Fischer used a database for his 92 World Championship Match.

Perhaps the writer of this blog can add some rating points to his low rating if he did some study and review of his games with a database.

oh no Look out Mr Closet grandmaster you might have upset all the database junkies like "database fan" who are obviously dependant on artificial help.

Perhaps I should clarify, the reason I didn't use a database in Sydney and Queenstown is that my CA is "§$%&/ and I haven't worked out how to use SCID properly yet so the problem is technical. Also a two year old leaves little time for prep. I am as surprised as everybody else that my results haven't suffered. I will use one again in future.....maybe.

"1 hour of database studying is worth 30 hours of book study"...I nearly fell on the floor laughing when I read this.

"1 hour database study equals 30 hours book study" is a press release made by Chessbase in the early days of chess databases.

The idea is if you want to find all king's Indian games won by black in your chess library, this search may take quite some work if you have a serious collection of books ( I have about 200 at present). With a database the search is completed in under a minute.

If a weak player is just reviewing his games, the benefits might be less. But for serious players this is an amazing time saving, allowing for some pretty heavy research into opening, opponents etc.

hope this helps you understand this point Simon.

Perhaps if the Aussie Chess Fedaration would be kind enough to supply this great talent Alex Wohl , a modern up to date database (eg Chessbase 10) they would soon have another Grandmaster!

You can't compare databse and book study, simply because they do entirely different things. Books are used for a background guide to: openings, specifically principles and themes; endgames; and generally improving technique. Databases are used for up-to-date opening variation analysis; and specific opponent preparation.

Comparing the two is like saying "One hour on the putting green is worth 30 on the driving range" - it doesn't make any sense. These days, no player can compete at an elite level without both sources.