The second "name-to-be-decided" chess club blitz tournament was held this afternoon in Sydney's Spanish Club and was won by Ernesto Puzon on 8 from nine games. He lost his last round to Charles Ghenzer.

Firstly, I say "name-to-be-decided" because nobody can decide if we should call ourselves the "Hyde Park CC" or "Town Hall CC" or "Sydney CC". At any rate, it's really the least of our worries for now.

And secondly, there were no big dramas but there were some minor mishaps with the clocks - mostly to do with a faulty lever or a wrong setting (i.e. playing with increment).

But perhaps most amusing was how this supposedly social affair seemed almost like an official tournament when we spent some 5 minutes debating the rules! Except for "you may touch the rook first when castling", the entire event was ran on FIDE regulations. Quite impressive.

Congrats to Puzon, thanks to the organisers, and also cheers to the strong players who turned up - Andrew Bird, Jason Chan and Charles Ghenzer.

The next event should be in a fortnight, same joint. But I'll let you know of exact times and other details later. For now, check out some pics from today's event. 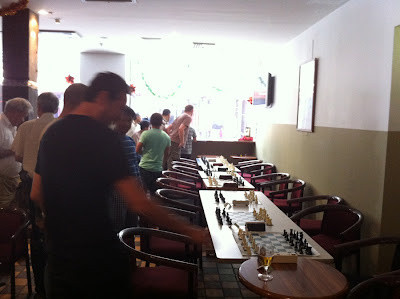 A side note: the inaugural event was actually won on a very impressive score of 9/9 by Leo Arocha. But that was only because I was in Tokyo.
Posted by The Closet Grandmaster at 8:09 pm