The BBC World Service doco, "Seeking the Endgame" was aired yesterday and for those who didn't hear it, you can listen to the podcast here. In it, we hear GM Ian Rogers say the following:

Well, for me it's an avenue for creativity. If on your day you can create a game that will be published around the world that people will look at and admire, I mean I haven't had too many days like that in my career, but one or two I've played a game where I'm really happy with and I know that its gonna make anthologies and be published around the world. I can't paint or write novels or anything like that so chess is for me an outlet like that.

GM Rogers is being a bit too modest, of course, for I'm sure he's produced many a masterpiece over the years. Who can forget this, for instance? 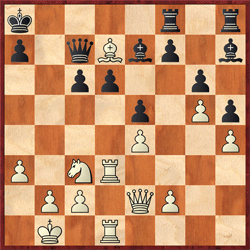 Actually, there's an interesting side story to this one. The game was in contention for the brilliancy prize that Kasparov ultimately won for his victory in Kasparov - Nikolic. If you pull up that game in Chessbase, it's hard not to agree that Kasparov deserved the prize. Problem was Kasparov himself was a judge! And, if you believe the chatter on chessgames.com about this little controversy, there may have been some other shenanigans going on, too.
Posted by The Closet Grandmaster at 8:41 pm

Do note that the documentary was only the first or two programmes - the next one is on this coming weekend. I thought it was pretty good.