Another Doeberl over, yet another memorable 5 days of chess in the capital. And for a second year running, a foreigner takes home the prize (US grandmaster Varuzhan Akobian won the 2008 edition). This year, Indian international master Deep Sengupta wins the Doeberl Cup on tiebreak. For Deep, his victory came with a nice little cherry on top after he also secured a grandmaster norm, his second. 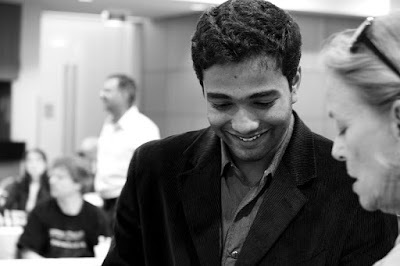 IM Deep Sengupta
Among the local contingent, IM Xie and FM Rej came oh-so-close with both of them just a half point shy of a GM and IM norm respectively. Rej's game against WIM Kruttika was particularly exciting as both players pressed and prodded each other until their last few seconds. Commentating on that contest GM Ian Rogers seemed a tad nervous about Rej. Could the young FM's Queen be compromised? Will he crack? Luckily, of course, Rej calculated accurately enough but in the end managed only a draw.

One notable detail about the premiere is that in eight out of 9 rounds, at least 1 grandmaster lost a game. And everyone's favourite punching bag? Iranian GM Shojaat Ghane. He lost to Andrew Brown, Andrew Bird, Geoff Saw and Arianne Caoili.

But let us all spare at least a momentary thought to my good mate Nicholas Kordahi. Nick finished down the bottom of the premiere field. Horrible experience for him. Never one to dwell too long on failures, this afternoon Nick says to me that he'll now give up chess and in its place he'll go back to what he's good at.

Well, good luck to you brother.

The major section was no less exciting as a whole bunch of people actually had chances to at least share equal first. However, the final tally revealed two players on outright first with 6 points apiece - Sydneysider Norman Brendon and South Australia's Colin Cloudsdale. Cloudsdale was the winner on tiebreak. Both these guys lost just one game each - Colin to Tony Weller and Brendon to Kerry Stead. In the latter game, Kerry relied on his long love the Blackmar-Diemer Gambit. It's an exciting game that's worth looking at. I'd show the PGN, but the dismally unreliable official website is once again nowhere to be seen.

Overall the 2009 Doeberl was a success. Two hundred and thirty seven players fronted up (an increase from last year's 229 and the 196 in 2007) and a couple of norms were gained, including the GM variety. The only serious blemish is, of course, the introduction of a dumbass event called Chess960. After years of Saturday blitz, we suddenly have this nonsensical variant. Apparently it's all about change, though I'm not sure exactly to what end. Here's an idea: have the blitz on Saturday and the Chess960 on Sunday. Hec, that gives the organisers one more source of revenue!

Speaking of traditions, we really cannot end without this shot of Tony Davis. Albeit of more recent vintage as far as traditions go, the wearing of that funny hat is how Tony ends his Doeberl campaign. Well done. 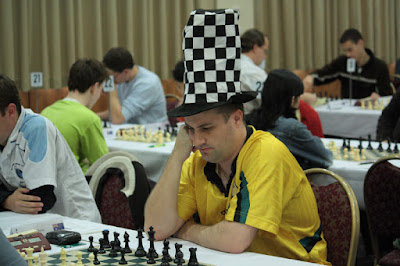 For more photos from the Doeberl Cup, see my Flickr stream here.

The fun and agony doesn't end in Canberra. See you all in two days at the Sydney International Open!
Posted by The Closet Grandmaster at 9:50 pm

Yes, that's actually a very good suggestion TCG! Lightning on Saturday and Chess960 on Sunday. Hope the organizers consider this...

So you're the closet grandmaster! I didn't know you were the writer. I feel silly now for the question I asked you at the tournament.

I'm pretty sure Nick won't be quitting chess. He's quite a bit better than the average player anyway.

TCG, may I use the photo of Tony Davis in my blog? I am covering the SIO for my countrymen. I will put the source of your blog.

Was Aronian even in Canberra?