Yes, yes...when I retire, this is how I'd like to spend my days. Quiet, relaxing chess at the park. When the drunks aren't around, that is. 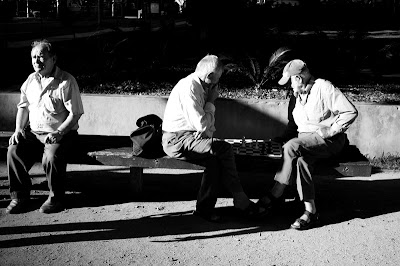 Chess in Hyde Park
You know what else? We've got this new guy at the park who isn't too bad a player himself. Some sort of postgrad student from Switzerland who sports a rating of 2300 FIDE. He's currently studying at Sydney Uni. He has one particular habit especially during a time scramble: viva two hands! According to him, it's them FIDE rules. See, I told you so. And this guy's smart.
Posted by The Closet Grandmaster at 5:45 pm

it is most definitely not FIDE rules.

What's wrong w/a couple harmless drunks breathing down your neck with the liquor-soaked breath while you're trying to concentrate on a speed game? ;).

I could be wrong, but I think the Swiss player you are referring to is Denis Bucher.