The National Gallery of Australia in Canberra is presently showing "Degas - Master of French Art". Now I'm no expert, but I saw some of this guy's works back at the Musee d'Orsay in Paris and, let me tell you, it was breathtaking. Simply beautiful! 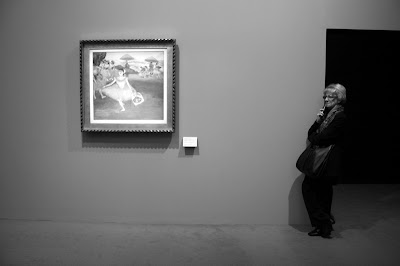 Photograph I took of a Degas painting in the Musee d'Orsay
When I heard about this exhibition, I immediately made plans to see it sometime during the Doeberl Cup. Sadly, it's not to be: the exhibition will end in a couple of weeks on 22 March! Just bad luck.

Meanwhile, about the Doeberl Cup - the latest info release from the organisers is the following: "The Indian Chess Federation informed us on Saturday that they would be bringing a mens and womens team out to the tournament (3 GM, 4 IM, 4 WGM, 3 WFM). This means that as of last night there were only 26 places left in the Premier. Players interested in playing in the Premier should register and pay as soon as possible to secure their position."

Note that the Indian player IM Tanya Sachdev is no longer playing in Doeberl and the SIO. Personal reasons, apparently.
Posted by The Closet Grandmaster at 7:40 pm