He lost in the end. But, it made no difference. IM David Smerdon is the 2009 Queenstown Classic Champion, scoring 8 points overall. His last round stumble to GM Gawain Jones was the only setback in what was a truly outstanding performance.

At the closing ceremony, David informed the crowd - mostly Kiwis, but with also a boisterous Aussie contingent - that these days he mostly plays for fun. He didn't even come here for those oh-so-crucial ratings points that will make him a grandmaster. Just for fun! And now with an extra $10K in the bank, I'm sure he can have just a little bit more fun away from the chess board! 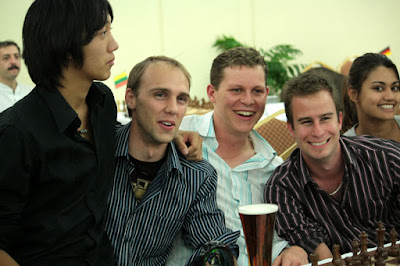 A bunch of very happy Aussies
The winner also let the audience in on a little secret. Why did GM Murray Chandler, the inaugural winner from 3 years earlier, pull out from this year's event? What else, but apparently to give David a chance! Serious.

All in all this was yet another unforgettable Queenstown tournament. Numbers were way down, sure, probably caused by that familiar reason, the financial crisis - but most of us still had plenty of fun. Some folks much more than others. How else to explain the less than stellar play of the tournament's top female masters, for instance? Even the seemingly constant complainer, Victoria's Richard Voon, allowed himself a few laughs.

But perhaps the one man who, for ten days, seemed like the centre of attention in nightclubs, pubs and bars was none other than Victoria's Malcolm Pyke. Now Mr Pyke had fun aplenty! The girls just love this guy, with cameras snapping in his direction. All thanks to his particularly unusual dance moves.

Finally, it is not certain if this tournament will ever happen again. With the low turnout this year it's probable that 2009's Queenstown Classic could very well be the last. In many ways, that seems tragic. If this is, indeed, the end - then we are only left with these simple words to GM Chandler: thank you.

And for those of us who've come here twice now, and who are smitten with this place and this here event, we must echo IM David Smerdon's words last night in his speech.

Back to work, Dave.

Congratulations to David Smerdon! Looks like it was a great tournament.