"I played a Dutchman and he plays the Dutch Defence! Shit!"

That was Richard Voon who lost yesterday to Freddie van der Elburg. When he gets going, he really gets going. He'll tell you whom he loves, and whom he hates. And he ain't got too much lovin' right now for the Queenstown organisers. After yesterday's round he was taking aim, not at the big wigs within FIDE, but at a much closer target. He wanted to shoot, no longer the aging Campo, but Paul Spiller! Figuratively speaking, naturally.

Richard's complaint is the tournament's policy of using the FIDE ratings for competition purposes but using (in the order that's applicable) NZCF, followed by ACF, then finally FIDE ratings for the purposes of allocating prize monies. "It's not fair", he insisted.

He has a point. At least one of the arbiters agrees that there is no logic to it. Why use one rating for seeding people, then use another rating system to allocate prize money?

The problem for Richard is that this particular, unusual, policy was conveyed in advance. It's there in B&W on the entry form. Had he read the tournament conditions carefully, he would have seen it. Richard admits, "If only I read the fine print, I wouldn't have come."

***
This morning, Bollywood came to town. A film crew had set up right in the main thoroughfare. It's the standard formula: a romance, all singing and all dancing, full of pretty young things; she plays all coy and runs off while he, with that ridiculous bouncy manga hairstyle, chases after her down the street. GM Rozentalis was among the bemused crowd and we chatted a bit. 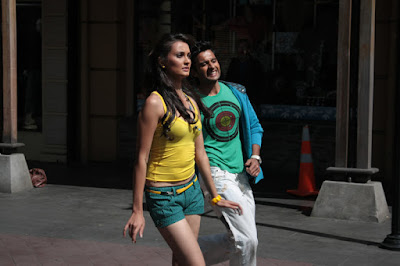 Bollywood in Queenstown
Rozentalis, all the way from Lithuania, is here on a holiday. First time he's been to this part of the world. I asked if he'll drop by in Oz en route back to Europe. No, was the answer. He has commitments in various European leagues to attend to. But he might have stopped over for the Australian Open if only that had been organised in time. Sadly, it wasn't, so Australia came off the agenda. An opportunity missed by the Aussies.

Then later, on my way to lunch, I ran into Malcolm Pyke. Being a Catholic, he'd just been back from Sunday mass.

Last night we spent a jolly good time in a karaoke bar. This Victorian nearly had the two of us ran out of town. For some strange reason he suddenly decided to sing some unknown Aussie song in front of a crowd of Kiwis! So unknown was it that it wasn't even in the playlist. Sans any accompaniment, brave Mr Pyke stood there singing his heart out. There were boos and jeers and somebody in the back shouting, "kick him out!" Thank heavens, we survived, although I don't know how.

A few more Bourbons for Malcolm and the local Tui for me, by 2AM we were done. But poor Malcolm must have been still recovering by morning. He'd gone to mass with the Anglicans!
Posted by The Closet Grandmaster at 10:10 am