Adrian Miranda remains undefeated by drawing his third round game against Eliot Hoving today at the NSW State Championships. Rated at 1579, Adrian is the top seed in the U1600 section.

In the Reserve section, the young William Xu, current Under 12 Champion of NSW, went down to regular weekend warrior Sim Navarro. Juniors these days are very well taught to keep on fighting til the bitter end. And that's exactly what William did. (He did so against Rachmadi last week, too, despite being a whole Queen down). Such a quality is important I think in order to instil that fighting spirit. Besides, miracles can happen. But today, there were no miracles.

You can play through the game here. 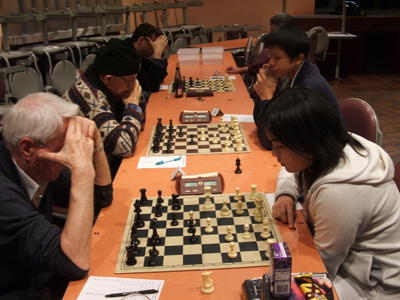 Seen in the foreground above, on the right, is Angela Song. Before the start of play, Norm Greenwood announced that FIDE had just conferred upon Angela the WFM title. To which the gallery rightly applauded. Well done indeed!

Over on the next board is the game Tse - Baterowicz. That ended 1-0. As the gruesome finish to that duel approached, Baterowicz's play increasingly became louder and louder. With each move, he banged the clock in anger. And when it was finally over, his face grew red, his eyes watered, as he lightly tapped his King off the table. He remained in his seat for some time. As I looked at him, I knew exactly how he felt. "Where did I go wrong?", I'm sure he asked himself. He sat there motionless, replaying in his mind's eye a game that never was. The other players just let him be, knowing that they, themselves, have all been there.

Finally, in the top section, Canfell continued on his winning run by defeating a careless Cabilin. The Pinoy player managed to trap his own Queen. He was so oblivious to his own terrible mistake that he accompanied the blunder with a draw offer. In reply, Canfell uncorked the diabolical, 16. c4! Realising White's follow-up (17. Nf3), Cabilin looked up at me, smiled and shook his head. One question was surely in his mind: "how the hell did I miss that?" To save the Lady, there was no choice but to forsake a Knight. It was pointless. Canfell was just too good. 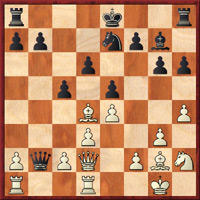