Just received a note this morning from Scott Humphreys, of the Hamilton CC in New Zealand, in which he relates the case of what appears to be an outright scam. A pair of players calling themselves Matteus Wagner and Carmen Lempert turned out to be father and daughter, Michael Stock and 18 year old WGM Lara Stock of Croatia!

Both players entered (get this) a rookies event and naturally finished in one-two spots. Here's a picture of the winners. 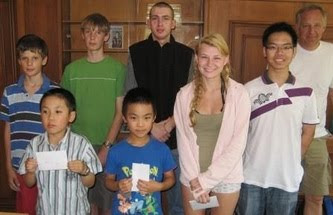 Image courtesy of Hamilton CC
Well, what can we say? At least she's hot.

UPDATE (3 March, 11.12): I just realised that my first link forces you to log in to Facebook. Here's an alternative link to the Hamilton CC homepage.
Posted by The Closet Grandmaster at 7:20 am

Hamilton Chess Club should apologize to WGM Lara Stock for running a rookies/pazters event with no real chess event along side.

What chess officals in the world would not be happy to have this lovely young lady complete in any of there events ???

Clearly having a million or so cows pooing in Waikato river which is used as the drinking water of Hamilton is having a great effect on there thinking ability!

does Hamilton only have weak chess players hence this silly pazter event. Hamilton Chess Club should be saying sorry for this

Well strange Lara fans, you can watch her play online at the Auckland Chess Centre on Saturday and Sunday - she and her father have made enquiries about playing. Don't know what names they plan to use but they are now sufficiently well-known in NZ that they will be forced to use their real FIDE ratings! Sorry, I don't think there's a webcam...

is there better photo of the beautful 18 year old WGM Lara Stock of Croatia ?

Chess, the last bastion of the sexist comment, and I thought we were in 2011.

You cannot expect a small country town in a country where chess is not popular to have a large open chess tournament, so ear bashing Hamilton officials seems extreme. However perhaps they should have just donated the prize money back to avoid all of this fuss? Rather simple really.
Perhaps they like being infamous ;)
Hahaha.

Hamilton is not a "small country town" but a major city in New Zealand.

It says something about the moral fabric of society these days that individuals defend and even condone lying at chess events. They lied about names, age of the daughter and playing strength. The small prize may not have been the motivation, but it is still a lie and erodes the confidence that low rated players have in entering rating limited tournaments.