The downside to predictions is that the characters in question are never always so cooperative. Today's first round of the major section in the Aussie Chess Championships, my pick Jason Chan suffered a surprise defeat to Victorian resident Vineetha Wijesuriya. 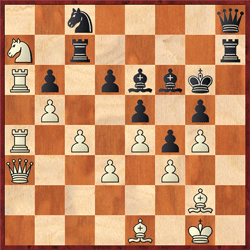 Ah, well, at least there's still a long, long way to go for Jason. Vineetha, by the way, is two-time Olympiad player, appearing for the Sri Lankan women's team in Manila 1992 and Yerevan 1996.

My pick for the main section, GM Gawain Jones, looked a tad shaky this afternoon against Chris Wallis but thankfully managed to pull off the win.

Among the other games Morris - Brown attracted particular attention. That was partly because the game was the subject of GM Ian Rogers' commentary. Also, it's always interesting to watch two talented young guns - one a newly minted IM, the other a proven giant killer - go pound for pound OTB. But the contest held interest mainly because it was quite fascinating! We'll have to wait for the PGN to see that one.

Sadly for Morris, Canberra's Andrew Brown was the winner on this occasion.
Posted by The Closet Grandmaster at 7:22 pm