I know I promised last week to post another report on the NSW State Championships. Honestly, I had every intention to. What with APEC going on in the city, being as far away from Sydney would have been the smarter option. But, as it turned out, I headed my way to Sydney - and not Parramatta - on Saturday to attend the "Stop Bush" rally.

I'm afraid, dear readers, that the rally had me completely knackered. With the event lasting the whole day I was too tired on Sunday to bother. So no chess report from me. You could head over to Trent's blog where he's got an interesting take on the switch from the usual 9 rounds to seven.

I tell you what, at least we've still got a seven-rounder. At the rate that the NSW Champs is going, we could very well be stuck with our own chessic version of equine flu!

No chess, but I can share a couple of photos I took on my day of protest. Here in this first one is a phalanx of men in blue, Australian Fed Police. I gather these guys were borrowed from Canberra. Like their local state counterparts - they were all fully armed with glocks, some with body armour and all. And against whom but an unarmed citizenry. Scary stuff! 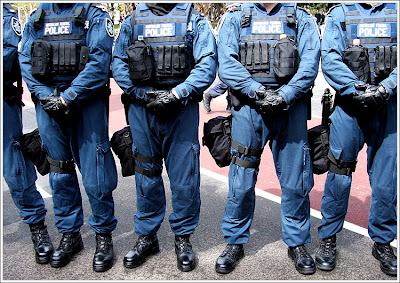 But it was mostly peaceful. A number of protesters were older women and some folks even brought along their kids in prams! Unbelievable. While others conveyed their message with a touch of humour too. Like these two guys. 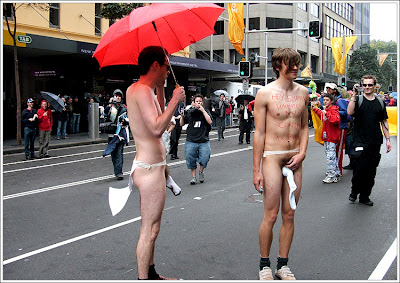 Moments after I snapped the photo, these two gents were grabbed by the police and "detained". And in case you're curious, written on one guy's bum cover were the words, "It's the hidden tools you must watch for the most - Confucius".

As is typical with rallies like last Saturday's, voices comes from a mix of angles. Expectedly, my neighbour Mr Mamdouh Habib was there. In case you didn't know, he's the guy who spent time in Gitmo. There was even a band of alleged neo-Nazis, wearing all black and hooded. The police quietly asked them to leave. 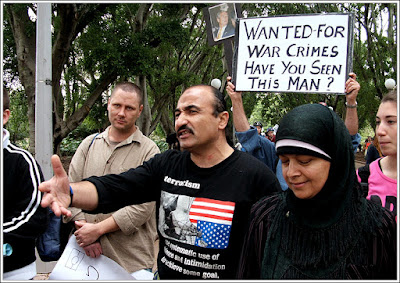 Well that was my weekend. Ahelluvalot more exciting than chess I must admit. But I won't have too many like those pretty soon. It's frightening to see a determined police force in action.
Posted by The Closet Grandmaster at 9:18 pm

"Stop Bush"? I guess you must have had a lot of un-chess fun with the kook crowd in a country considered as generally sensible and one of America's greatest allies.

Why Bush? In a few months, he'll be in Crawford, Texas, enjoying life as a human being.

In a few months, you'll probably get what you wish for - a Democrat who most likely won't act if Aussies ever get attacked by the Islamofascists and their terrorist ilk.

At least Mr. Bush took action, even if he knew, as a history major, that war would inevitably be unpopular, with sacrifices by many Americans and allies paying the ultimate price.

My son, an American army officer, can just as well stay home, and get to play some good chess with me. And to hell with it, why bother? We'll just lock our borders and be safe.

Perhaps next time, we should just let the French speak German, and maybe some Aussies speak Japanese.

Well, even the Nazis and the Kempeitai played chess! LOL.

TCG,
You could have escaped APEC with a trip to Blayney :)
6 Rounds of Chess, 5 Rounds of Blitz, good company, good feed, and not a single glock seen anywhere. :)

Bush is a history major? LOL.

He can barely read.

Yes, he graduated from Yale. He then went on to complete an MBA from Harvard.

Anyhow I've always believed that this guy's illustrious education doesn't quite reflect his true intellectual ability. But that's not really unique to Bush, you know. I think I read somewhere that many students attend the Ivy Leagues thanks mainly to parental connections. Or is that donations?

He's awful in public speaking, can't pronounce "nuclear", and calls Aussies "Austrians" and Greeks "Grecians". But he's reported to be an avid reader, probably has an intellectual capacity higher than ten thousand bums picked at random in Bondi Beach, and at least knows how to keep his pecker in his pants unlike his predecessor.

GWB. Gotta love him or really hate him. What a guy!

Here's a chess link for the loonies who really hate Mr. Bush.
http://www.chessbase.com/newsdetail.asp?newsid=2001