OK, it's only bullet, but the guy was an IM and since it's about the only chess I play these days, I thought I'd share it. I think it's called the "Shirov-Shabalov Attack", I can't remember, but it's definitely one that gets the adrenaline going, whether in OTB chess or online.

I remember once being on the white side of this opening against Tomek Rej when I decided to offer him a draw, just to see how he'd react. He said, "you gotta be joking!" 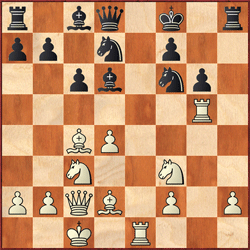