What is it about knights?

In last year's SIO, former Australian Junior Champion (1982) Paul Broekhuyse resigned his position after a knight fork. Except that his opponent's move was actually an illegal one.

In today's first round of Sydney International Open 2010, it happened again, this time to no less a seasoned player than grandmaster Daryl Johansen! 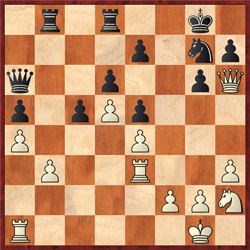 Doubtless both players were in severe time trouble and simply overlooked the mishap. Such is chess.

Coverage of the SIO tournament is here.
Posted by The Closet Grandmaster at 9:52 pm

amazing I never knew a Knight could move like a bishop when needed, how handy ! (haha)

Johansen was not in time trouble at all - he had ten minutes left. Ansell had about a minute and a half.

Was Johansen at the board when the move was played?

Can such an illegal move stand after the game is finished? I mean, should not the arbiter award the game to Johansen after the mistake is discovered? What does FIDE rules say about this situation?

Signed scoresheets, nothing else matters!

As for signed scoresheets, they are not quite the be-all-and-end-all. If the result that is signed for by the players is not the correct result the arbiter may decide to rectify it. But that is different to a case where players sign off on a correct result and an illegal move is later discovered.