On a visit to England this week, SA president Jacob Zuma managed to achieve a double. He embarassed himself silly in front of his hosts.

After blasting the Brits as "colonialists", the African leader then later met the Queen and presented her with a chess set. There's only one problem. Former SA president Nelson Mandela had already given the same exact chess set way back in 1996! The Mirror has the juice. 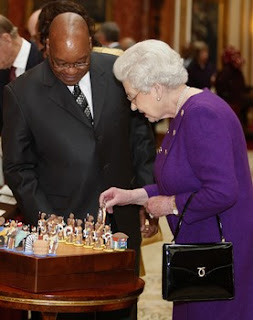 In fact, that chess set was shown at this recent exhibition.
Posted by The Closet Grandmaster at 3:21 pm