Not an impressive turn-out. Maybe that's why the first round was nearly an hour late. It seemed to me that the organisers were trying to wait for more players to turn up. Even I was asked if I was playing. Nope, sorry, I had to say. Sadly, I have to do some work on Sunday. 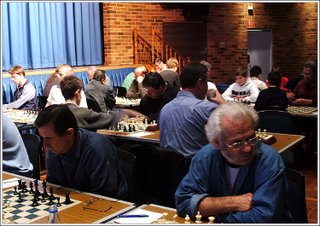 The venue. Poor lighting.
After 4 rounds of play, GM Rogers leads on 4 points. In round 3, Rogers essayed his Benko Gambit against Broekhuyse. It is an opening that the Aussie number one trots out every now and then against weaker opposition.

There was a time when I hated going to the Sydney suburb of Parramatta. The train station was ugly and its immediate surroundings were hardly inviting. You walk around the place and you think, any moment now someone will mug you.

But this morning, I was pleasantly surprised at what I saw. What have they done to the place, I wondered.

The train station is freshly renovated and it all looks very world class. Gone is that horribly gloomy all-brick 50's style architecture and replaced with a more airy and modern approach that is reminiscent of today's airports. Everything is very well done. 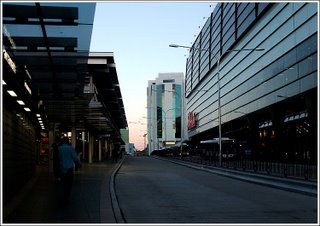 The Parramatta main street. Looking good!
There is now an underground walkway that connects the station to the main Westfields shopping centre - just perfect for those rainy days. And naturally, businesses have also come flocking. Fancy restaurants now line the main street leading up to Wesfields. I had lunch here: risotto accompanied with a nice Saltram Shiraz.

All this bodes rather well for Brian Jones'Sydney International Open in 2007. Parramatta is the perfect venue. Like most Sydney chessers, I can't wait. Let's hope that Mr. Jones finds a sponsor soon. 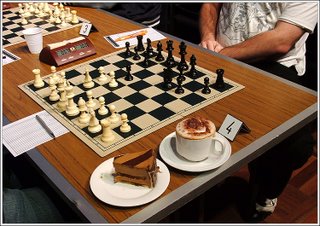 Chess, cappucino and cake
Posted by The Closet Grandmaster at 10:37 pm

maybe the lack of entries is directly connected to not being able to start on time repeatedly.

Get rid of on the day entries and especially the ability to pre register, but not pre pay and most of the late running tournament worries are gone.

Numbers are actually up on last year considering that the last venue was rose bay.

Perhaps its just that time of year.... no one wants to play chess?

TCN- from my reading of most of the nsw posts, the far eastern venues dont work as it is just too far for most of the sydney population to get to ie NSW Open and the Rose Bay tournaments.